Information, resources, and links for action oriented items to join in on the fight against racism and injustice. 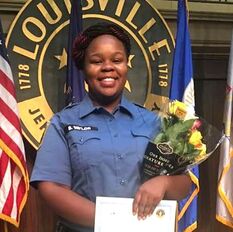 Breonna Taylor
On March 13, 2020 (a little after midnight), 26-year-old Breonna Taylor was killed by Louisville police. They executed a "no-knock" warrant for a narcotics raid resulting in them entering her home without warning or identifying themselves) and shooting her at least eight times after a brief confrontation.
Louisville police were investigating two men who were allegedly selling drugs out of a home that was NOT Taylor's residence. However, a judge signed off on a warrant to raid her home due to the speculation that one of the men who were under investigation had used her apartment to received packages. At this point, no information regarding the speculation has been proven to be true.
Breonna Taylor was an emergency room technician with a bright future ahead. Her life was cut short due to the negligence and lack of due diligence carried out by the Louisville Police Department.
As of today, no charges have been filed for the murderers of Breonna Taylor. We are demanding justice for this beautiful young lady who dedicated her life to saving others.
IMPORTANT LINKS: Sign the Petition for Justice | Donate to the Family of Breonna Taylor |